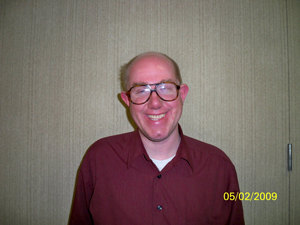 My name is Jim Jirak.  I was born early spring in the early hours of the morning.

Having been born with both cataracts and glaucoma, I was mainstreamed in the public school system and provided the necessary equipment to successfully complete my high school education.

During my high school tenure, I became actively involved in vocal music and drama.  Being cast in numerous theatrical productions ranging from Godspell my sophomore year to Annie my senior year and several other plays in between, I also took part in the All State choir.  Additionally, I performed solos in the All State District Music Contest.  I also was a member of the Ambassadors, our high school swing choir.

Graduating with scholarship in hand and a predetermined major in radio broadcasting; I attended college for three months then dropped out.  It was my realization that college wasn't for me.  Not only does high school not teach you how to study, but going to college for everyone else but yourself is the wrong reason to attend.

In April 1989, I began my employment with a major hotel chain, where I made reservations for potential hotel guests.  After 10½ years, I, in September of 1999, was then promoted to the customer service department.  Then in October 2002, I returned to the entry level position of confirming reservations then left the company in January 2014.

I was referred to the Nebraska Commission for the Blind & Visually Impaired when the agency was known as the Services for the Visually Impaired.  Receiving a telephone call from a rehabilitation counselor, I was explained the reason for the call and suggested I develop the skills necessary to deal with my blindness.  Dan Hill was my initial rehab counselor with George Binder my orientation and mobility counselor.

During the summer of 1985, I took part in Project Independence.  As a participant, I remember loathing the mandatory use of sleep shades as Nancy's spaghetti sauce stained never worn again white dress can attest.

In the fall of 2004, I was approached by Nancy about the possibility of maintaining NCBVI's Website.  Having been given proper training, I re-designed the site making it more user friendly for JAWS users.  I served as volunteer Webmaster from October 2004 to February 2007 when it became obvious that the pending re-design requested was too much for one person to handle.  However, because of this developed skill, I have maintained several Websites, including the American Council of the Blind of Nebraska's.

I became involved with the American Council of the Blind of Nebraska, (ACBN), in May of 1989.  I had been approached by a member about the idea of a cab subsidy program that was talked about in earlier years but never acted upon.  It was the intention of the member to meet to not only discuss the feasibility of a program but to get the concept launched.  As a result, my first ACBN meeting was at the League of Human Dignity Saturday, May 20, 1989 where it was decided surveys should be conducted to gage consumer participation.  We discussed potential funding and grant opportunities.  The cab subsidy kicked-off June 14, 1995.  I currently serve as vice-chair of this now established not-for-profit.

I have attended countless national conventions of the American Council of the Blind, (ACB,) since 1990.  Serving as our delegate for many of those years, I, in 2000, with thanks to the coordinated efforts of our then vice-president, oversaw the ACBN sponsored first combined caucus for smaller state affiliates.  Now several ACB affiliates have adopted this practice.  I am also a life member of the Council of Citizens with Low Vision International, (CCLVI), and served as its nominating committee chair at our 2007 national convention.  And at the 2008 ACB national convention, I was elected to its board for a 3-year term.  Choosing not to seek another term, in 2011, I relinquished my board position and then served as chair of the constitution and by-laws committee before being elected president for a one-year term in July 2012.  I am now both its convention and membership chair for the 2014/2015 calendar year.

Other organizations I still affiliate with, or have in the past, include the Fraternal Order of the Eagles, the Nebraska Association of the Blind, (NAB), where I served one term as secretary and the Omaha Association of the Blind, (OAB), where I served two terms on its board from 2012-2014.  I also served one term on the Radio Talking Book, (RTB), Board and did some volunteer work for them during the summer of 1987.  Additionally, I held the positions of treasurer and secretary for the Nebraska Council of Organizations for the Visually Impaired, (NCOVI).

My hobbies include listening to light rock from the 70's, 80's, 90's and today, spending time at our cabin, discussing politics with those having differing points of view than I, socializing with friends and college football, with special emphasis on the Cornhuskers.  I also enjoy Nebraska baseball, too.

I am pleased to have been appointed to serve as the ACBN representative to the NCBVI Board of Commissioners.  It is my goal to make myself available to listen to the concerns of staff, clients and consumers alike by fulfilling our organizational motto "people first - causes second."  It is important to remember that I can't address any concern not raised.  I look forward to the opportunity in assisting in any way I'm able.