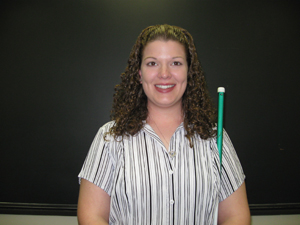 I would like to take the time to introduce myself. My name is Carol Jenkins, and I am the newest board member serving on the NCBVI Board of Commissioners as well as being the National Federation of the Blind of Nebraska’s designee.
I was born on May 21, 1983 and was raised in Troy, Kansas, where I grew up on a farm with my parents and two siblings. After graduating with honors from Troy High School in 2001, I was determined to attend college. I enrolled in classes at Highland Community College and set out to work my way through school. By this time, I was living with my new step-family in Atchison, Kansas, where I worked at Long John Silvers and became a team leader and manager.

I graduated from Highland Community College, with honors in 2003, with an Associate of Arts Degree in Mathematics and an Associate of Science Degree in Science. After graduation, I took some time off from school and worked at a local casino to save money for furthering my education. This is where I met my husband, Brett, whom I married in the summer of 2006. Up to this point, I had planned to become a veterinarian, but I soon realized I had a calling to educate others. I knew this would be a difficult task, but I told myself I could do anything I set my mind to. In the fall of 2004, I enrolled at Peru State College, where I decided to become an education major.

After completing the Fall 2006 semester, at Peru State College, I determined it was time for me to obtain rehabilitation training from the Nebraska Center for the Blind, to further enhance and aid in the accomplishment of my goals. I graduated from the Nebraska Orientation Center for the Blind in June of 2007 just in time for my student teaching experience in the Fall 2007 semester at Peru State College. I sailed through my student teaching experience, the Federal No Child Left Behind Testing, and Teacher Certification through the State of Nebraska. I graduated, Summa Cum Laude, from Peru State College in December of 2007 with my Bachelors of Science Degree in Elementary Education and Early Childhood Development.